Affordable housing is so hard to find in South Florida that Broward County is giving away 40 vacant lots so more working-class homes can be built.

The effort is the latest designed to create places to live for families being priced out of home ownership because of the region’s high real-estate prices.

A quarter of people living in Miami-Dade, Broward and Palm Beach counties spend more than half their income to pay for housing, creating a severe financial burden on them, a Harvard University report said last year. Nationally, only the Los Angeles area had a worse percentage. 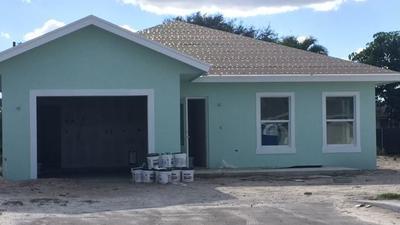 Besides getting developers to include higher numbers of affordable units in their residential projects, local communities have taken to addressing the issue where they can, even on a house-by-house basis:

A Broward Housing Summit is being held at Nova Southeastern University on March 29. Participants will discuss the problems, the need for a dedicated funding source for affordable housing and potential solutions to the housing crisis.

Broward spent $4.3 million to build and finance 18 homes that were completed last year in its Franklin Park neighborhood, but now it’s attempting to stretch its limited dollars further.

That was the idea behind giving 40 lots — which the county received because of unpaid property taxes — to 10 nonprofit agencies. Broward will pay some site preparation costs and provide up to $60,000 in down payment assistance to each eventual home buyer, but the nonprofits will pick up the rest.

The county says its total cost related to the 40 homes won’t exceed $3.4 million.

The lots are in the unincorporated communities of Washington Park, Roosevelt Gardens, Boulevard Gardens and Franklin Park, generally along the Northwest 27th Avenue corridor north of Broward Boulevard.

The decision Tuesday to partner so heavily with nonprofit agencies comes after the giving Habitat for Humanity five lots in 2015. Construction on those lots is expected to begin this summer.

Home buyers will have to meet income guidelines. For a family of four, that means a total household income under $101,500. Similar homes the county built in Franklin Park sold for $185,000 and officials estimate the new homes will probably sell between $175,000 and $200,000.

The homes will have a minimum of three bedrooms, two bathrooms and 1,500 square feet of air-conditioned space. They’re also required to have two-car garages and barrel-tile roofs

The nonprofit agencies see the program as a chance for their services to reach more people and to make sure buyers have the support they need to deal with the challenges of home ownership.

“We don’t just come in and build houses. We touch people’s lives,” said Linda Taylor, interim CEO of HOMES Inc., which will receive four of the lots. “We’re looking to come in and transform this community. That’s our goal.”

The agencies have 18 months to obtain permits and build the homes. The homes will be available through a lottery system. Lottery applications will be available starting April 3 from the county’s Housing Finance and Community Redevelopment Division and can be submitted by noon May 26.

“Anyone who will be purchasing in this area will be purchasing on a gold mine,” said Bonnye Deese, executive director of the Broward Alliance for Neighborhood Development, which is also receiving four lots. “If that house was put anywhere else, they would not be able to afford that house.”